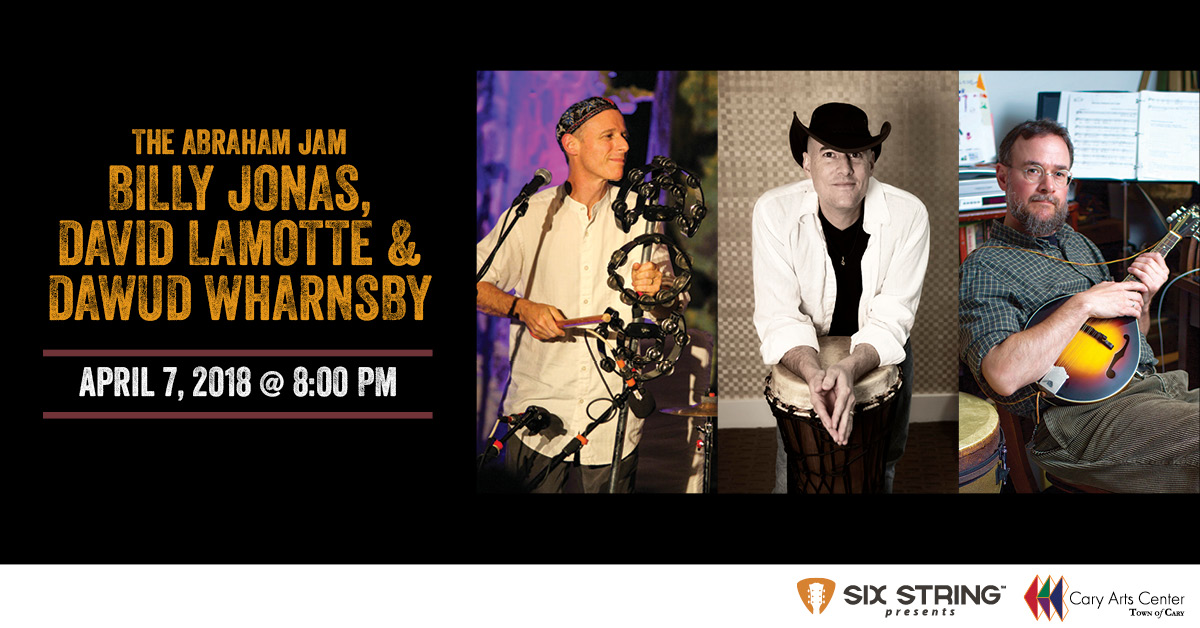 A Muslim, a Jew, and a Christian walk into a concert hall…

What may be mistaken for a stand-up comedian’s opening line is actually Abraham Jam, a trio of internationally-renowned musicians who have teamed up to create art strengthened by diversity.

Abraham Jam–composed of Billy Jonas, David LaMotte, and Dawud Wharnsby–features three “brothers” from the three Abrahamic faiths. Jonas, LaMotte and Wharnsby have performed extensively over the last few decades in their individual careers. They came together and recently announced a special one-night concert that will take place on Saturday, April 7, 2018 at The Cary Arts Center

“For thousands of years, in villages spread out around the world, song was a way for common people to share and pass along their stories,” explains Dawud Wharnsby. “Today, when we’re so interconnected through travel and technology, it is important that we also communicate. We need to sing our world’s ongoing story together.”

The band originally formed in 2010. LaMotte, who was working with the North Carolina Council of Churches at the time, came up with the concept as a goal to form interfaith respect and cooperation. He approached campus Jewish, Muslim, and Christian student organizations in the area and put together an interfaith student committee that chose which musicians would be involved, as well as the name of the band.

Jonas is well known in Asheville and around the country as an accomplished percussionist, guitar player, pianist, and songwriter, with infectiously whimsical songs and a knack for inspiring audiences to join in.

Dawud Wharnsby, the third member of Abraham Jam, is a Canadian-born poet, songwriter and artist. He began sharing his songs with audiences as a street performer in his late teens. Today, Wharnsby’s career includes fifteen solo albums, numerous soundtrack credits and collaborations, and five poetry anthologies.