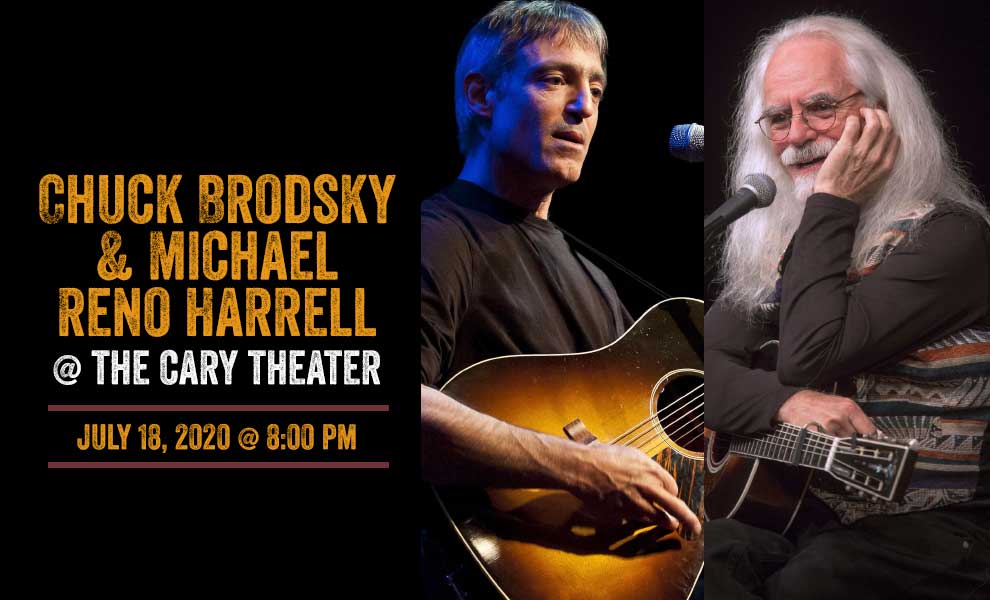 “Chuck Brodsky can sing, fingerpick, and strum with the best of ’em…a storyteller, and a riveting one at that… an underlying tone of warmth and compassion runs through all his carefully observed narratives.”

Chuck Brodsky is a storyteller, a songwriter, a troubadour, a modern day bard. His wit and irony, down-to-earth warmth, and quirky, rootsy, finely crafted songs tell stories of oddball and underdog characters. His songs celebrate the goodness in people, the eccentric, the holy, the profound, the courageous, the inspiring, the beautiful. They poke fun at what needs poking and sometimes challenge what needs to be challenged. They’re sworn to tell the truth.

Over the past 28 years, Chuck has performed at festivals and in concerts all across the USA, Canada, Ireland, Denmark, England, Israel, Lithuania, Latvia, Wales, and the Shetland Islands of Scotland. He’s performed three times at the National Baseball Hall of Fame, and 22 of his Baseball story songs have been enshrined in the Hall of Fame’s sound recording library.

Chuck and his songs have appeared in several films and on tv. His beloved Philadelphia Phillies featured an interview with him along with his song “Whitey & Harry” in the documentary “Richie Ashburn: A Baseball Life.” The 2003 Sony Pictures release “Radio” included a cameo by Chuck as well as his closing title track. “Moe Berg: The Song”  appears in the PBS film “Jews and Baseball: An American Love Story” (2010).

His music has been featured on ABC’s Good Morning America, NPR’s All Things Considered, Dr. Demento, ESPN, PBS, and by NFL Films.

Kathy Mattea’s recording of Chuck’s song “We Are Each Other’s Angels” appears in the film “Dear Mr. Goodlife” (1998). The African Children’s Choir Of Uganda also recorded the song on their “Love Is A Journey” CD. “Blow ‘em Away” has been recorded by David Wilcox and many others, and also appears on the Christine Lavin produced “Laugh Tracks.”

Sports Illustrated placed “The Ballad Of Eddie Klepp” among the 25 Greatest Songs About Sports of All–Time. In April of 2019 Chuck was inducted into the Philadelphia Jewish Sports Hall Of Fame for his Baseball songwriting.

Having received worldwide acclaim for his previous albums, Chuck’s 11th release “Tell Tale Heart” was self-produced, recorded in Asheville NC, and was among the top ten most played CDs on folk radio for all of 2015. Four of Chuck’s early CDs were produced in Atlanta by Sugarland’s Kristian Bush, while four of his more recent CDs were produced in Cape Breton, Nova Scotia, by J.P. Cormier. In March of 2018, Chuck released his latest self-produced album, “Them And Us,” which also received tremendous radio airplay. The album’s title track was the 5th most played song on folk radio for all of 2018.

Michael Reno Harrell is an award winning songwriter, as well as a veteran storyteller and entertainer, and he’s from the South… the Southern Appalachian Mountains to hone it a bit finer.

One could compare Michael’s performances to his granddaddy’s pocket knife: well warn and familiar feeling, but razor sharp and with a point. His brand of entertainment appeals to a very diverse audience. A typical day for Michael might include a program for 4th graders in the afternoon and a concert for a mixed audience that evening.

Michael’s recordings top the Americana Music Association charts year after year. His original songs and stories have been described as “Appalachian grit and wit” but, as his writing shows, Michael’s awareness is much broader than the bounds of his boyhood home or even the Southern Experience. Having toured throughout the British Isles and much of Europe, as well as most of the US, the songs he writes and the stories he creates reflect an insight into people’s experiences that catch the ear like an old friend’s voice.

Michael’s natural knack for storytelling, in print, song and spoken word has earned him praise from not only the music community but from the literary and storytelling worlds as well, having had the honor of being a Featured Teller at the National Storytelling Festival and to be Teller In Residence at the International Storytelling Center, as well as performing at major music events like MerleFest and the Walnut Valley Festival. Along with his performances, Michael often conducts workshops in songwriting and storytelling as well.