An Evening with Ellis Paul 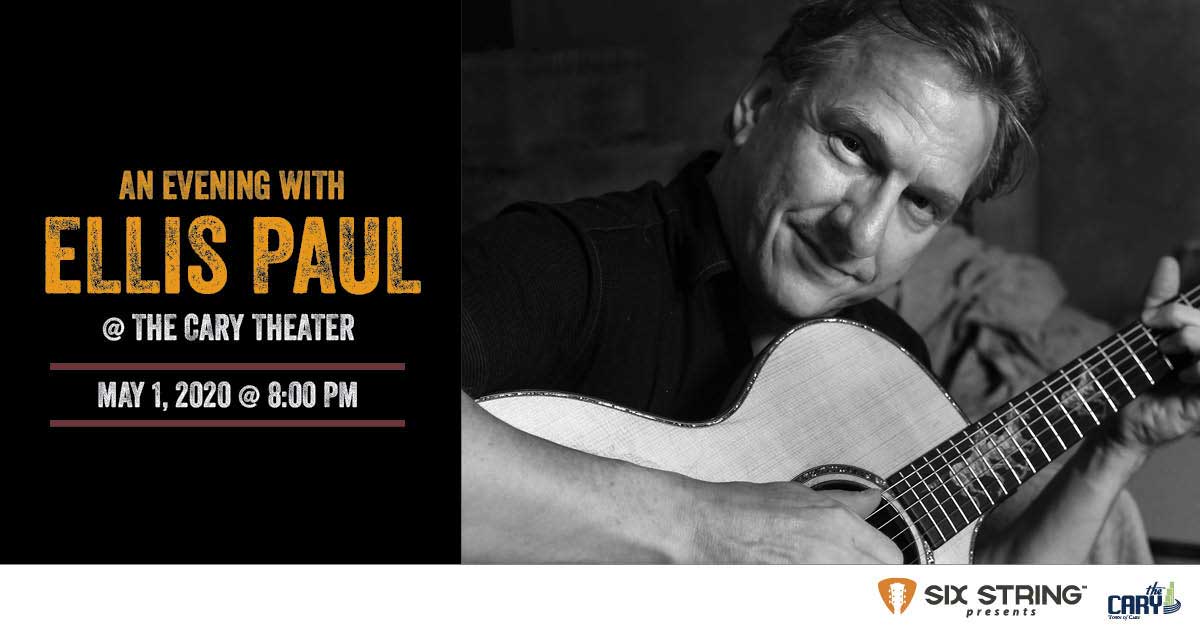 Ellis Paul is one of those gifted singer/songwriters. Though some may refer to him as a folk singer, he is more, for lack of a better word, a singular storyteller, a musician whose words reach out from inside and yet also express the feelings, thoughts and sensibilities that most people can relate to in one way or another, regardless of age or upbringing. The exhilaration of the open road. A celebration of heroes. The hope for redemption. Descriptions of those things that are both near and dear. The sharing of love…, intimate, passionate and enduring.

Working as a teacher and social worker with inner-city children by day and pursuing the possibilities offered by Boston’s fertile music scene at night, he gained prominence in local coffeehouses and open mic nights. It was the same circuit that opened the door for other like-minded artists of the day, and in turn, gave Paul exposure to such creative contemporaries as Shawn Colvin, Dar Williams, Patty Larkin, John Gorka, Catie Curtis, and Bill Morrissey. It also helped him win a Boston Underground Songwriting competition and placement on a Windham Hill Records singer/songwriter compilation, bringing him his first hint of national exposure at the same time.

The major tipping point in his career came with the opportunity to open for Bill Morrissey, one of New England’s most prominent folk artists. Paul would repeatedly ask Morrissey about his own influences and seek his advice on who he ought to listen to. “You know, that’s a very smart thing to do,” Morrissey muses. “It helped set him apart. A lot of young singers I meet are not curious about what went on before; they just say, ‘I want to sing another song about my life.’ Paul has a sense of roots, of connectedness to the whole history of folk music; he sees the thread that runs through all the generations of this music.”

Paul also became infatuated with the music of Woody Guthrie, drawn to Woody’s social consciousness and the humanitarian streak that ran through his work. He even had a tattoo of Guthrie imprinted on his right shoulder, referring to it as “a badge of who he was.” His commitment to Guthrie’s legacy eventually led to his inclusion in a ten-day celebration of Woody’s work held at the Rock and Roll Hall of Fame in September 1996, an event that included such notables as Bruce Springsteen, Billy Bragg, the Indigo Girls and Ani DiFranco and which was presided over by Guthrie’s daughter Nora.

In addition to his 19 albums released on the Rounder and Black Wolf record labels, his music has appeared on dozens of distinguished compilations. A Film/ DVD entitled 3000 Miles — part concert film, part documentary, part instructional video — provides a further perspective on both the man and his music. He’s also released a pair of children’s albums, earning him honors from the Parent’s Choice Foundation for both. His latest, ” The Hero In You ” has been turned into a picture book, detailing the lives of great American heroes. Ellis’ literate, evocative and insightful writings are further showcased in a book of poetry and short stories entitled “Notes from the Road, ” already in it’s third pressing.

It’s no wonder then that recently Paul received a prestigious honor: an honorary Doctor of Humane Letters degree from the University of Maine, which also asked him to write the school’s alma mater as well as deliver its commencement address in May 2014.

Happily, his music has been shared with a wider audience as well, through commercials, documentaries, TV shows and in the soundtracks of several blockbuster films, among them three by the Farrelly Brothers — “Hall Pass” (starring Owen Wilson and Alyssa Milano), “Me, Myself, & Irene” (starring Jim Carrey) and “Shallow Hal” (starring Jack Black and Gwyneth Paltrow). Peter Farrelly summed up the sentiments of all those who have come to know and appreciate Paul’s music by referring to him as “a national treasure.”

“Ellis Paul is one of the best singer/songwriters of his generation, And for many of us he is the face of contemporary folk music. Few are as smart, as literate, as poetic as Paul. I cannot think of another artist on the acoustic music scene is better loved by fans, or more respected by his contemporaries.”

Indeed, he is all that, and in a very real sense, even more. He’s an observer, a philosopher, and an astute storyteller who shares with his listeners the life lessons he’s learned, and in turn, life lessons they ought to heed as well. By affirming and defining who he is, Ellis Paul affirms and uncovers the essence of us all.

“An Evening With Ellis Paul” is supportedrt by local Cary Singer/Songwriter Mark Easley of Goldhat Music. Mark and Ellis co-wrote and recorded the song “The Eagle Has Landed” as a 50th anniversary tribute to Neil Armstrong and the Apollo 11 mission. For more music featuring Ellis and Mark please visit the GoldhatMusic YouTube Channel.