The Taters and Wyatt Easterling 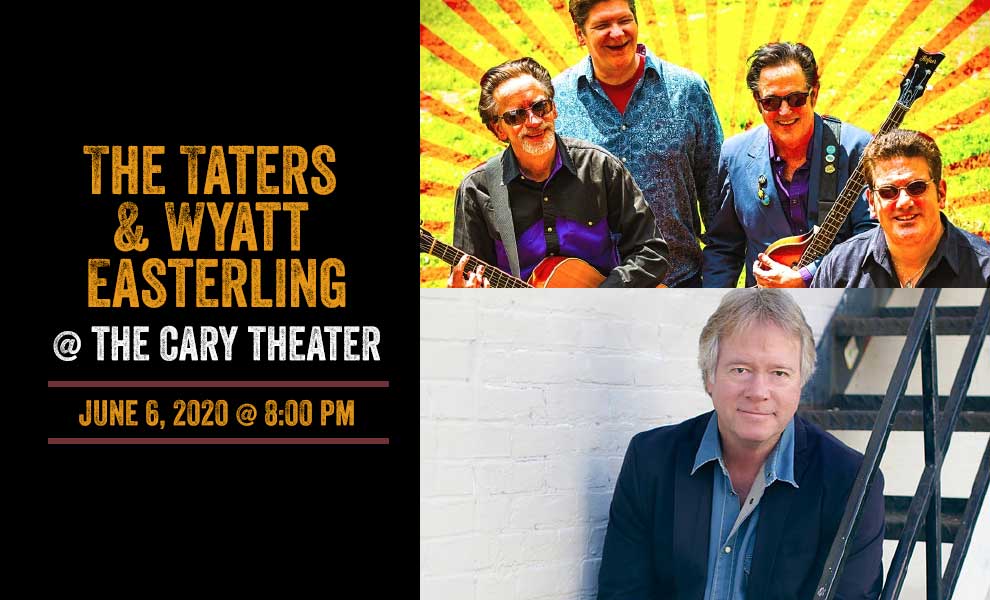 The Taters play an eclectic mix of roots rock, pop, country, skiffle & Americana, a sound that’s been compared favorably to a mixture of Everlys, Orbison, Beatles, and Nick Lowe. Writing in Billboard Magazine, critic Gordon Ely described the Taters as “determinedly-and gleefully-forging a path with no limits or end in sight. This is music for which you’ve been waiting a long, long time… Without a trace of self-consciousness or pretension, the Taters draw up a formula that can rightly be claimed as their own”.

The last few years have included 2 shows with The Richmond Symphony, the start of a new live recording, tributes to The Everly Brothers, and The Bee Gees (in full costume and hair!), a show where we performed the entire Beatle’s “HELP” album, and Halloween show tribute to The Twilight Zone, where the stage and band were all in classic black & white!  We constantly gravitate toward things we’ve never tried and it helps keep things fresh.

“…That’s 20 years of musical virtuosity, perfect harmonies, tight instrumentation, cosmic song juxtaposition, and outright joyful silliness. Craig Evans and Brad Tucker started it all, adding old friend Greg Marrs and Chris Mendez along the way and perfecting a sound that’s unmistakably Tater-fied and consistently surprising. Elizabeth Cotten to Led Zeppelin to Ledbelly to Dean Martin all in one set. It goes to show you never can tell.” – North of the James, Anne

Wyatt first came to Nashville as a folk singer on the verge of signing with CBS Records, but in true industry fashion, Sony acquired the label, and the deal fell through. Undeterred, he signed on as a writer with a new publishing company opened by former CBS label head Rick Blackburn.

After a couple of years there, Blackburn brought him on as head of A&R at Atlantic Records where Wyatt signed some of country music’s biggest names including John Michael Montgomery, Tracy Lawrence, Michael Johnson, and Neal McCoy. He also began working as a producer, guiding Montgomery’s debut album Life’s A Dance to an impressive three million copies sold. After Atlantic, Wyatt opened Bugle Publishing Group with partner Miles Copeland, where he signed a number of artists, most notably Keith Urban and Paul Thorn. At Bugle, Wyatt also produced Thorn’s debut album Hammer and Nail and got the future superstar Urban his first record deal.

During that period, Wyatt and Miles had the inventive idea to turn a chateau in the south of France into a writers’ den they called “The Castle” where they began pairing their Nashville songwriters with big-name artists like Carole King, Cher, Peter Frampton and Olivia Newton-John. In time, Wyatt was ready to move on from the publishing world, and he signed as a writer with DreamWorks Publishing, API and EMI where he had numerous songs recorded by the likes of Dierks Bentley and Joe Diffie, including the gorgeous title track from Bentley’s album Modern Day Drifter.

After all of his time navigating the many facets of the music industry, it turns out his true destination was in fact to be a singer-songwriter. He started touring, including consecutive appearances as a finalist in the prestigious Kerrville New Folk contest, and he’s since recorded his two beautiful albums Where This River Goes and Goodbye, Hello. And now happily we have a third collection of songs by Wyatt Easterling in Divining Rod that we can all listen to it for years to come.