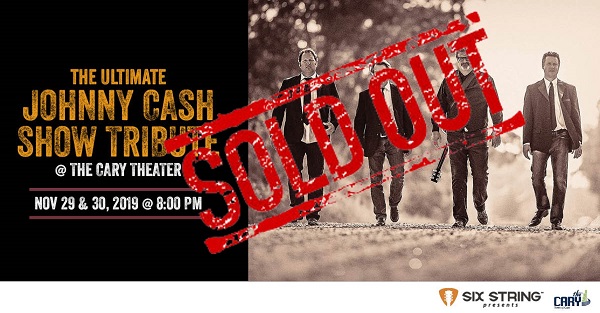 The Johnny Cash Show was a television music variety show hosted by Johnny Cash from June 7, 1969 to March 31, 1971 on ABC; it was taped at the Ryman Auditorium in Nashville, Tennessee.

Now Six String Presents and The Johnny Folsom 4 bring the show to the newly renovated 1940’s Cary Theater for 2 nights on November 29th and 30th, 2019.

The last time Johnny Folsom 4 played the Cary Theater we sold out of tickets days before the show. This time they’re returning with a cadre of special guests and a bigger show! We’ve added a second night so don’t miss out. Get your tickets now!

This show will feature the ultimate Johnny Cash Tribute Band, The Johnny Folsom 4 as the house band both nights. Each night will include a different song list with special musical guests singing some of the songs featured on the original Johnny Cash Show.

Get your reserved tickets early to what promises to be a fantastic night of music, stories and song.