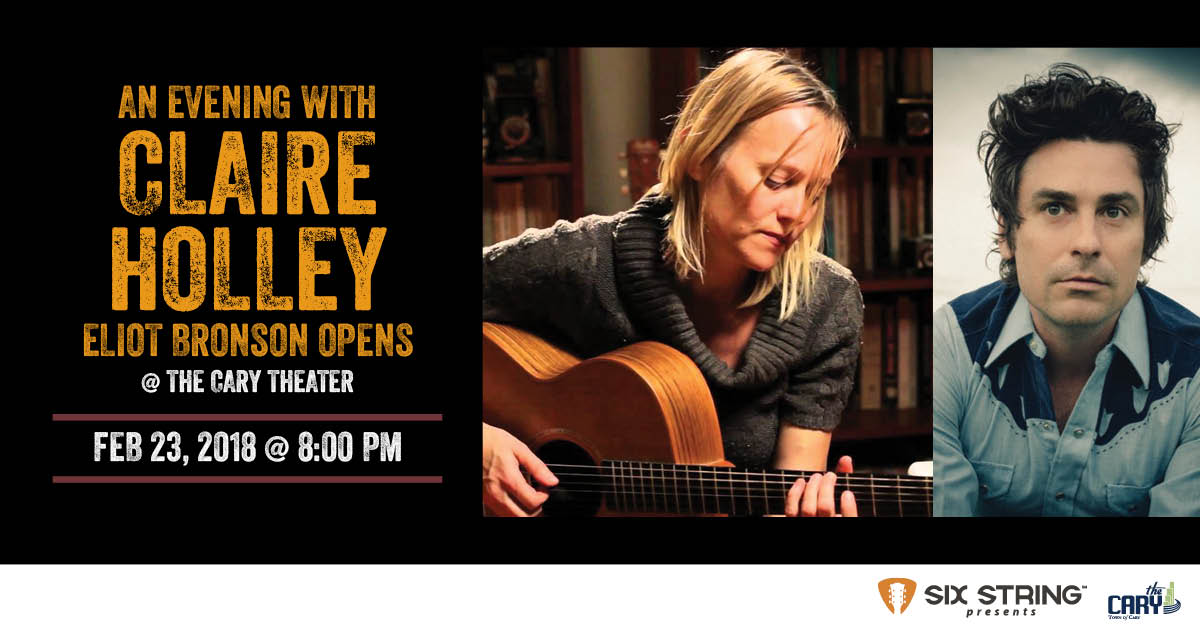 Our next show is February 23, 2018 at The Cary Theater when Claire Holley returns “back home” for an evening of beautiful music and entertainment. It all starts at 8pm when recently signed recording artist Eliot Bronson opens.

This will be a spectacular and entertaining evening with some of our most popular musicians on tour. Tickets will go fast for this show, so get yours early at www.SixStringPresents.com.

Claire Holley grew up in Jackson, Mississippi and enjoyed singing ever since she was a little girl. She began writing songs in college and has released seven full length records + two EPs. Her music has been featured on NPR’s Weekend Edition as well as in films & TV shows. She lives in Los Angeles.
Some quotes
“…simultaneously powerful and light as a feather.”
—No Depression
“The charm of Holley’s hummable melodies, imagistic lyrics and vocal prowess suggest she’ll keep bringing crowds in from the cold…”
—Washington Post
“She owes much to the southern tradition of storytelling, and just as much to the southern tradition of charm…”
—Image Journal
“Holley’s vocal is lovely, and her poignant lyrics impart a wonderful sense of yearning born on a quiet strength.”
—Metro Magazine
“A highly skilled instrumentalist, Holley … has a way with a melody as well, writing strong hooks into every one of the songs on the new album.”
—Performing Songwriter
“Claire Holley is an observer, a romantic reporter from the backyards and front porches of the heartland”
—Acoustic Guitar

Eliot Bronson was a member of folk favs The Brilliant Inventions. The Atlanta Music Guide says: “Eliot Bronson is the type of songwriter who could squeeze out something meaningful about taking out the trash. He writes heartfelt songs with dark humor and backs them with his resonant voice and swampy instruments.” Georgia Music Magazine notes: “He can pull at your heartstrings like nobody’s business.” Coming up, in his native town of Baltimore, Maryland The Baltimore Sun called him a “a folk singing wunderkind.” He has won such esteemed songwriting awards as first place at Chris Austin Songwriting Contest at MerleFest and Eddie Owen Presents “Songwriter Shootout,” and he’s been a finalist at Kerrville Folk Festival, Rocky Mountain Folks Fest Songwriting Contest, and New Song Contest Lincoln Center NYC.

Upcoming Shows:
Thank you for supporting Six String Presents and please join us on Facebook and Twitter to get more photos, videos and information about upcoming shows and events.
www.facebook.com/sixstringpresents , www.twitter.com/6stringpresents or @6stringpresents