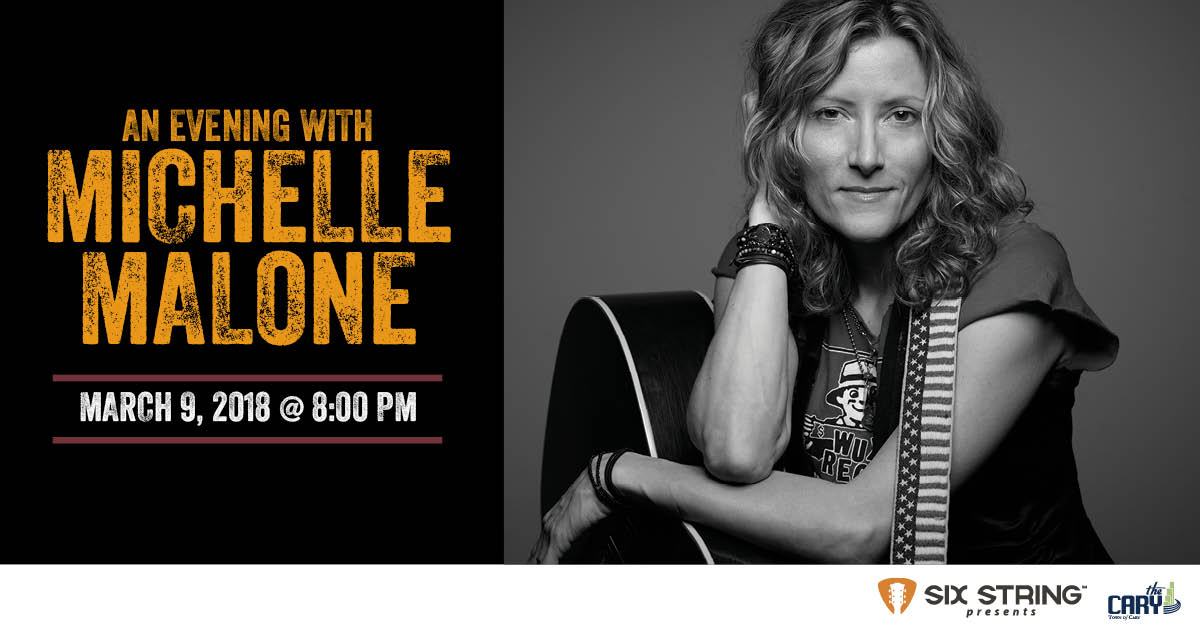 Our next show is March 9, 2018 at The Cary Theater when we present sultry and bluesy Michelle Malone in her first visit back to The Six String in over 12 years. It all starts at 8pm so don’t miss it.

This will be an entertaining and rockin’ evening with one of the most experienced and recognized musicians on tour. Tickets will go fast for this show, so get yours early at www.SixStringPresents.com.

MICHELLE MALONE  is an American singer, songwriter, guitarist, and producer in the rock, folk, blues, alt-country and pop idioms. She is also the founder of SBS Records.

Malone was born and raised in Atlanta, GA by a musician mother with whom she toured in the summers. She grew up listening to her mother and grandmother sing in the church choir every Sunday when they werent on the road. She dropped out of high school at 16, lived in the streets and developed some nasty habits. After a few brushes with the law, she went back to high school and became the valedictorian. She attended Agnes Scott College with dreams of becoming a doctor, but was offered a record deal with Clive Davis at Arista Records, which looked alot more interesting to her than school.

After several major label releases, Malone is now an independent artist with 14 studio records to date and an impressive resume which includes high profile performances with everyone from Gregg Allman to John Mayer, the Atlanta Symphony to Ellen Degeneres. She has performed in 7 countries, toured as a performer in the Indigo Girls, in the new band led by SugarLand’s Kristian Bush, and in The Black Lillies. Day 2, produced by fellow Atlantan and Grammy nominee Shawn Mullins, spent 12 weeks on the Americana radio charts and received critical success. She has been honored with awards including 2x best albums, 4x best singer, 3x best acoustic guitarist, Best of Georgia Music awards, and 2 Grammy ballot nominations. Her songs have appeared in such films as Bam Bam and Celeste, All Over Me, Shotgun Jesus and television programs including True Blood, Dawson’s Creek, Felicity, and Brooklyn South. Malone’s songs have been recorded by Indigo Girls (for which she received both gold and platinum records), Antigone Rising, Hannah Thomas and Vistoso Bosses.

Malone also makes time for philanthropic endeavors such as fundraising/running for Team In Training/The Leukemia Society, and cycling with Team Earth Challenge from Atlanta to Yucca Mountain, NV in protest of the nuclear waste dumping. In 2012 she started a college scholarship fund for girls in need. In 2015, Michelle partnered with Moe’s Music Matters national campaign to help support music in schools.

Malone has performed for TedX Peachtree, been honored with a Signature guitar slide modeled and named after her by Rocky Mountain Slides, was the keynote speaker at a SoCal high school graduation, and in 2014 was the rhythm guitarist and mandolin player for Kristian Bush of Sugarland. Michelle’s latest recording, Stronger Than You Think, was released in 2015. She is currently writing and performing for her sanity

His version of “Beautiful Believer” has been released on an EP as part of a collection of songs written during his time spent living in Nashville (2013-2015). Adamo’s Joe Cocker-like “bold grit and heart,” and ability to take a captive audience from “engaged silence” to a “floor stomping, rollicking, good time.” With the addition of Doug Casteen (lead guitar), Alex McKee (bass), Fabio Consani (harmonica, acoustic guitar), and David Littlejohn (keyboard), who all bring years of unique experiences and influences, The Jason Adamo Band (JAB) creates a brotherly vibe and puts a new spin on Adamo’s classic soul.