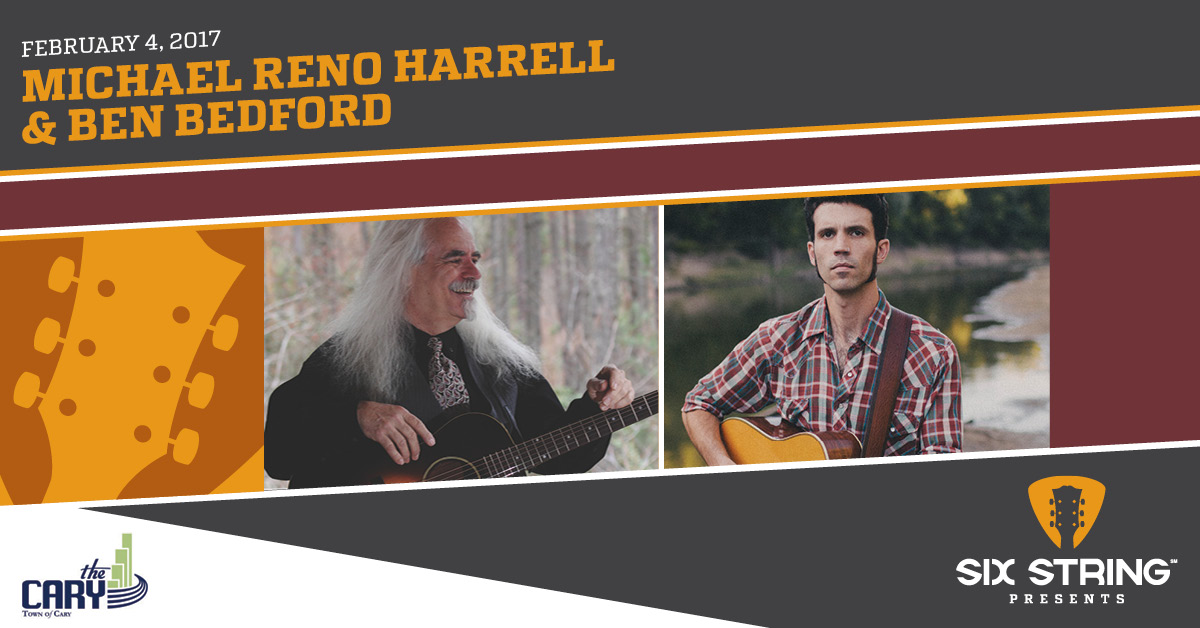 Well I can’t think of two performers who capture more of what the original Six String Café was all about than Michael Reno Harrell & Ben Bedford. I’ve known Michael since the very first days of The Six String and have become such a fan of the man and the musician. Michael played the first show after 09/11 and showed us all how humor and song can bring us back to what is good in this world. Ben Bedford represents new talent, playing for Six String Presents the first time, but representing how this Six String journey has discovered some of the best singer songwriter talent in the country.

Please join us Feb 4, 2017 at The Cary Theater to hear these two outstanding talents share a night of music, humor and some great stories.

Michael’s recordings top the Americana Music Association charts year after year. His original songs and stories have been described as “Appalachian grit and wit” but, as his writing shows, Michael’s awareness is much broader than the bounds of his boyhood home or even the Southern Experience. Having toured throughout the British Isles and much of Europe, as well as most of the US, the songs he writes and the stories he creates reflect an insight into people’s experiences that catch the ear like an old friend’s voice.
Michael’s natural knack for storytelling, in print, song and spoken word has earned him praise from not only the music community but from the literary and storytelling worlds as well, having had the honor of being a Featured Teller at the National Storytelling Festival and to be Teller In Residence at the International Storytelling Center, as well as performing at major music events like MerleFest and the Walnut Valley Festival. Along with his performances, Michael often conducts workshops in songwriting and storytelling as well.

Michael’s recordings have for years received and continue to garner awards in Country, Americana and Folk circles. His humor and wit, as well as the emotional depth of his work, keep his fan base growing and staying tuned in for whatever comes next. Don’t miss the chance to experience what those faithful fans keep returning again and again to enjoy.
Watch the video of Michael

Ben Bedford
benbedford.com
Ben Bedford delivers intriguing sketches of America, its individuals, their victories and their struggles. Poignant, but never sentimental, Bedford’s portrait-like songs capture the vitality of his characters and draw the listener deep into the narratives.

With his fourth album, The Pilot and the Flying Machine, Ben Bedford takes the listener on a philosophical, poetic, and powerful sonic flight. With his songwriting as erudite as ever and his guitar playing further honed and refined, Bedford enters decidedly new territory in terms of themes, sound, and arrangement with this album. While his tried and true singer songwriter influences, such as Townes Van Zandt and Patty Griffin are here, this album owes as much in inspiration to the piano playing of Vladimir Horowitz and Thelonious Monk, the theatrical songwriting of Kate Bush, and the open sounding jazz and classical recordings of the late 1950s
Watch the Video of Ben
Upcoming Shows

“The Stories Behind the Songs”
Gary Hannan & Julianne Ankley
Mar 10, 2017 – The Cary Theater

Thank you for supporting Six String Presents and please join us on Facebook and Twitter to get more photos, videos and information about upcoming shows and events.
www.facebook.com/sixstringpresents , www.twitter.com/6stringpresents or @6stringpresents
Our Calendar:
(click on the artist name for a link to their website)