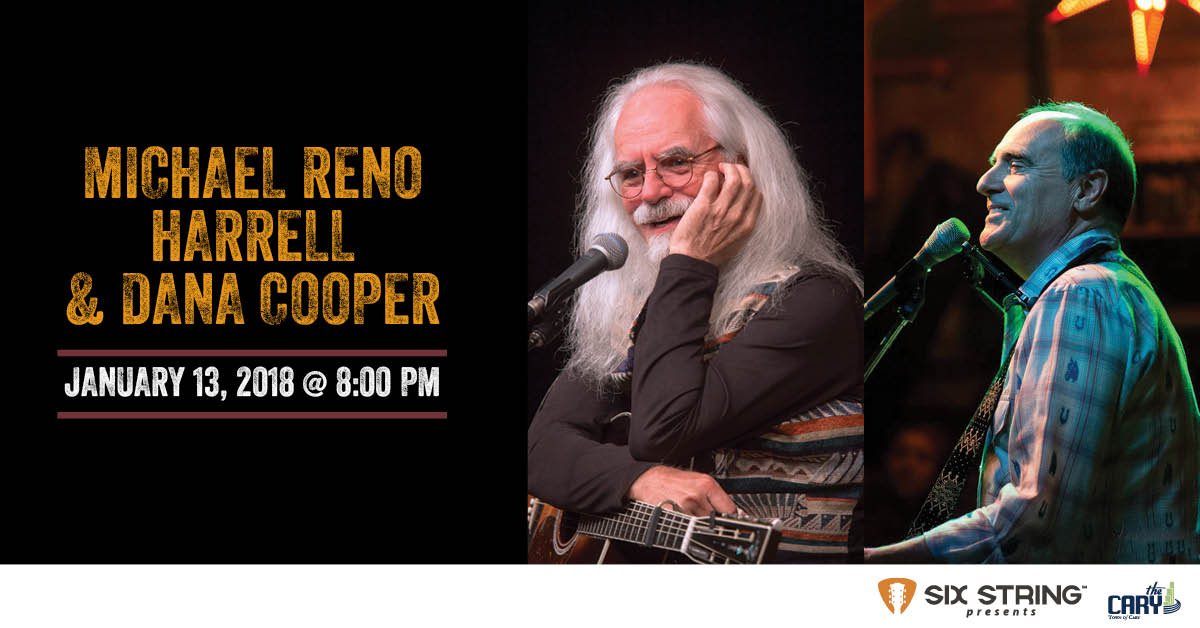 We kick off 2018 with Six String favorites, Michael Reno Harrell and Dana Cooper, on Jan 13, 2018 at The Cary Theater. These two troubadours have been singing songs and telling stories internationally for many years and they always put on an entertaining show.

This is a spectacular and entertaining evening with some of the most popular performers touring on the Americana circuit. Tickets go fast for this show, so get yours early at www.SixStringPresents.com.

Michael Reno Harrell is an award winning songwriter, as well as a veteran storyteller and entertainer, and he’s from the South… the Southern Appalachian Mountains to hone it a bit finer.

Michael’s recordings top the Americana Music Association charts year after year. His original songs and stories have been described as “Appalachian grit and wit” but, as his writing shows, Michael’s awareness is much broader than the bounds of his boyhood home or even the Southern Experience. Having toured throughout the British Isles and much of Europe, as well as most of the US, the songs he writes and the stories he creates reflect an insight into people’s experiences that catch the ear like an old friend’s voice.
Michael’s natural knack for storytelling, in print, song and spoken word has earned him praise from not only the music community but from the literary and storytelling worlds as well, having had the honor of being a Featured Teller at the National Storytelling Festival and to be Teller In Residence at the International Storytelling Center, as well as performing at major music events like MerleFest and the Walnut Valley Festival. Along with his performances, Michael often conducts workshops in songwriting and storytelling as well.

Out of the heartland of America, stomping grounds of Truman and Twain, “powerhouse” troubadour Dana Cooper dedicated himself to a life of music over 40 years ago. This song poet engages and inspires audiences around the world with his quick wit, insightful stories and commanding presence. He is the recipient of the 2014 Heritage Musician award from Pilgrim Center for the Arts in Kansas City, MO. He was also named the 2015 Spirit of Folk award winner by Folk Alliance International. He has performed on Austin City Limits, Mountain Stage and the Kerrville Folk Festival where he was nominated for their Hall of Fame. Cooper’s songs have been recorded by top-notch artists such as bluegrass star Claire Lynch; Irish vocalist Maura O’Connell; and luminary songwriters Pierce Pettis and Susan Werner. Cooper’s mixture of flat-picking, finger-picking and percussive strumming style is legend among other guitarists. An expressive singer his voice is ageless evoking a rich lifetime of experience.

His prolific endeavors have resulted in 20 albums. The critically acclaimed Miracle Mile on Compass Records was nominated for a Nashville Music Award as “Best Pop Album” and was chosen by Performing Songwriter magazine as one of the top DIY recordings for the year. Harry Truman Built a Road was named one of the best records of 2002 by The Tennessean and was also chosen as one of the top twelve DIY recordings for that year. Made of Mud released on King Easy Records in 2005 won Cooper the “Best Male Songwriter Award” by Indie Acoustic Project. Working with co-producer/guitarist Thomm Jutz, Cooper released Building a Human Being in September, 2015. This is Cooper’s 25th album and it’s gaining momentum on Americana radio stations all over the US.