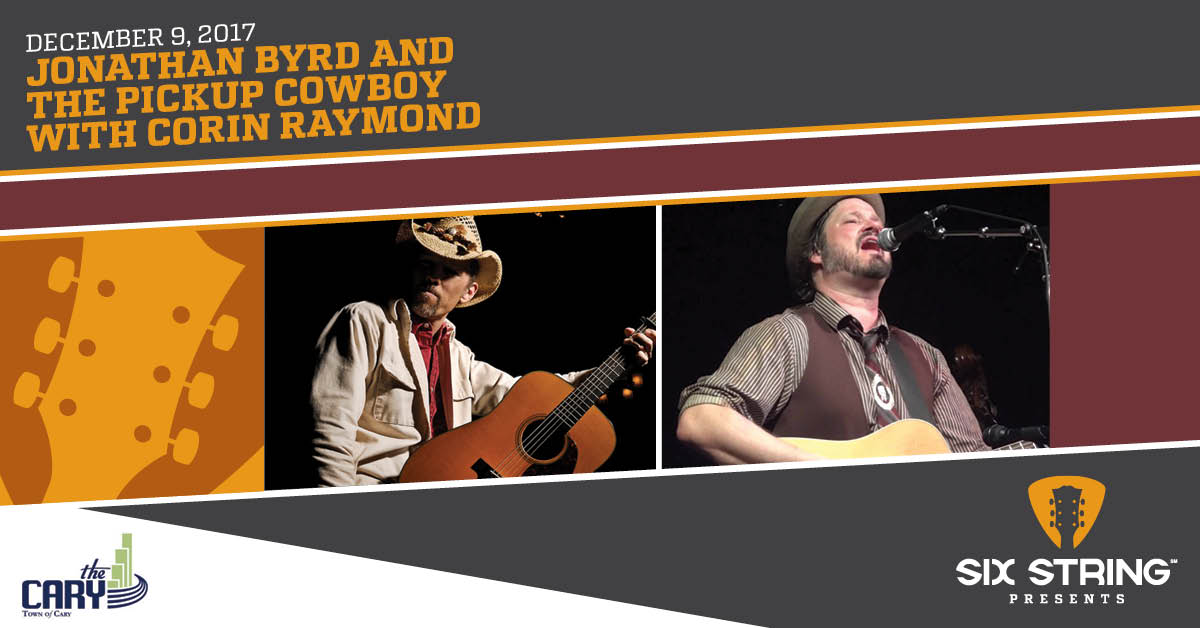 We’ll be winding up 2017 with our annual show featuring local favorite and internationally touring singer-songwriter Jonathan Byrd and The Pickup Cowboy along with Canada’s Corin Raymond on Saturday, December 9, 2017 at The Cary Theater.

This is a spectacular and entertaining evening with some of the most popular performers touring on the Americana circuit. Tickets go fast for this show, so get yours early at www.SixStringPresents.com.

Jonathan Byrd is a preacher’s son, a Gulf War veteran, and an award-winning songwriter from Chapel Hill, North Carolina, known for literary, outsider songs that have become campfire favorites. The Chicago Tribune called Byrd “one of the top 50 songwriters of the past 50 years.”

Multi-instrumentalist Johnny Waken cut his teeth on electric guitar in Pittsburgh with rock legend Norm Nardini, opening for The Blues Brothers Band on their Red, Hot & Blue tour in 1992. On stage and after hours, he jammed with members of Bon Jovi and the legendary Steve Cropper. At the age of 24, Waken left music to pursue primitive skills and through-hiked the Appalachian Trail in 2000 with an eleven-pound pack. Returning to music years later Johnny joined theatre troupe Paperhand Puppet Intervention, contributing to scores for nine shows and winning 4 Indy Awards for best original music.

Jonathan Byrd and The Pickup Cowboy are musical gunslingers, vaudevillian hucksters, and old-fashioned tent revivalists. Between heartbreaking ballads and hell-raising sing-alongs, the Cowboys entertain and get audiences involved in the show.

Toronto songwriter Corin Raymond is a troubadour whose robust veracity appeals to older folks and children alike. Raymond’s songs are covered by Dustin Bentall, The Good Lovelies, The Strumbellas, The Harpoonist and the Axe Murderer, and a far flung community of roots musicians and enthusiasts.

“Raymond has impeccable timing, and his performance is at once intimate, openhearted, and evangelical.” (The Georgia Straight on Bookworm) “Corin Raymond is a storyteller who by the end of the night you’ll have known your whole life.” (The Globe and Mail).